ERCAS’s researchers scrutinised the evolution of data from the Worldwide Governance Indicator (WGI) Control of Corruption, published by the World Bank for the period 1996-2011. Analysis took into consideration data from 196 countries, and found that for the vast majority of them the scenario is of stagnation in control of corruption. Only 21 countries showed statistically significant improvement over the past 15 years, and 27 countries significantly regressed. In a regional perspective, some positive trends were also identified: the region with strongest positive development in this time-series was Central Europe and the Balkans, followed by Latin America and the Caribbean. On the other hand, Middle East and North Africa, together with Asia and the Pacific, have on average worsened. 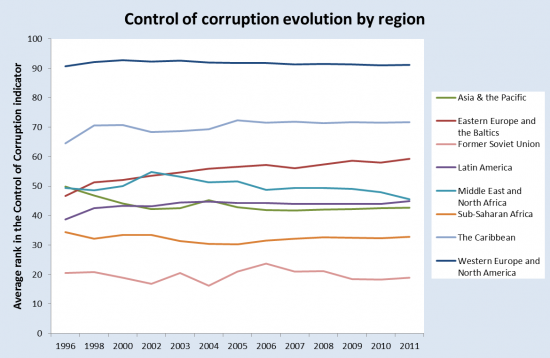 The study also examined the trends for distinct groups of countries based on income level and democracy status. In both cases, the picture is rather gloomy. For all four income groups (low, low-middle, upper-middle and high), the average in the control of corruption indicator has declined since 1996, with a steeper deterioration in the case of upper-middle income countries. When contrasted with the significant increase in the number of countries in the top two income categories, these results suggest that countries are becoming richer much faster than they are catching up with good governance standards. In the analysis for countries at different democracy levels, based on the classification by US-based NGO Freedom House, all three groups of countries (free, partially free and not free) show on average slight deterioration in control of corruption.

The analysis produced by ERCAS is part of research work conducted within the scope of project ANTICORRP and will set the background for global and regional trends reports to be published in early 2013, and for the selection of countries that will be examined in case-studies to be conducted in the next phases of the project. ERCAS, a partnership between the Hertie School of Governance and the Romanian Academic Society, is a new research centre located at Hertie which will conduct research on behalf of the ANTICORRP project. ANTICORRP (2012-2017) is c0-funded by the Seventh Framework Programme for Research and Development of the European Union, and will examine causes of corruption as well as recommend policy solutions.