For decades, international declarations have stressed the importance of women’s equal participation in politics. Yet men are still in the majority among elected bodies in most parts of the world, be they national assemblies or local councils. The scholarly comparative literature exploring this issue has largely focused on the patterns across countries – examining factors related to institutions, socio-economics as well as gender equality values. But a growing body of research is now using theoretical insights from corruption research to explain men’s domination of politics.

Studies of party organisations and legislatures suggest that recruitment practices differ between countries. In settings where corruption is common, clientelist practices tend to be the dominant means by which people are recruited to political posts. In such settings, newcomers to politics may face obstacles, as the prevailing political elite tends to favour candidates who are already a part of their networks. This mitigates against the election of women, as in most settings the political elite tends to be comprised of men.

In our recent study – corruption as an obstacle to women’s political representation – Lena Wängnerud and I test if there is a relationship between the degree of corruption in a region and the average share of women on local councils. We built a dataset of regions in Europe based on the NUTS-system (Nomenclature of territorial units for statistics), a structure of geographical units used by the authority Eurostat when reporting subnational statistics. We first collected data on the share of women in local councils for the most recent elections, which were aggregated up to an averaged value in a region. These scores where then matched to a data source of regional corruption perceptions in Europe. The figures were taken from the 2010 European Quality of Government Index (EQI), a comprehensive measure of perceptions of corruption in government services based on a survey answered by 34,000 citizens.

There is a big variation across Europe in the share of elected women to local councils (see Figure 1, the map). The shades of grey show the percentage of women in the local councils of these regions, and a darker shade indicates a higher share of women. 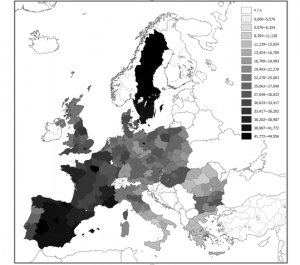 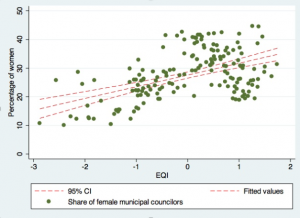 Our article presents an analysis that includes statistical controls for potential alternative explanations, such as regional levels of economic development and formal institutions of election systems at the national level. Taking such factors in to account, the findings suggest that a region where corruption is widespread on average has lower shares of locally elected women compared to a region with low corruption levels (more specifically, the size of the coefficients from our models indicates that  a one-point increase in the regional governance score should predict an average increase of approximately 2.3 percent in female councillors).

Our approach contrasts with much of the comparative research on women’s underrepresentation in recent decades, which often focussed on national parliaments. The study offers a more robust test of the argument mentioned above, as we explore this relationship in a research design where regions are the unit of analysis and we can therefore control for national level factors. Taking in to account factors like the type of electoral systems and women’s participation in the labour force, it seems the degree of corruption in a region has an impact on the share of women in local councils. This, we believe, attests to the reasoning that corruption is closely related to informal recruitment practices that hinder the advancement of women in politics.

For policy and further research, we believe greater emphasis should be made on formalising recruitment to political posts and demanding higher transparency in the competition for posts within parties. This could challenge clientelist practices and perhaps increase the share of women who successfully gain access to power.