In his 2011 book Obliquity, economist John Kay argued that objectives are best achieved indirectly, or obliquely. Given the shadowy nature of corruption, some researchers are examining corruption from new, often indirect angles with the hope of arriving at new indicators to help deconstruct, define and defeat corrupt behaviour. 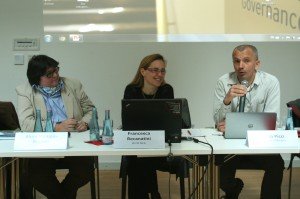 Mihály Fazekas also presented the results of his recent, prize-winning work  with István János Tóth in developing new indicators from analysing public procurement data.  By taking an indirect approach, the researchers were able to even come up with what is considered the “holy grail” amongst anti-corruption researchers: an indicator that measures political corruption.

University College London (UCL) Professor Alena Ledeneva presented research on moving closer to nation-specific indicators, because, as she notes: “Current indicators do not allow for bottom-up input, but only a top-down approach, and they do not allow for considering cases where corruption is not the exception, but the norm.”

Ledeneva’s research focuses on organized crime and clientelistic networks or “sistema” which is the Russian term for system and describes the state of reality where people rely on an informal system of personal connections to get ahead or complete a bureaucratic process. 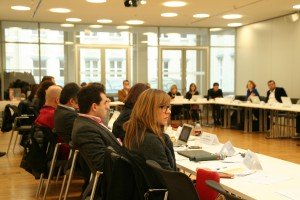 ANTICORRP researchers and Hertie School Executive Master of Public Management students at a workshop on second generation indicators of corruption.

Ledeneva borrowed from Kay’s theory on oblique approaches to complex challenges and argues for an indirect approach to measure and analyses informal behaviour, noting that in many cases, the best way to study corruption is not to mention the word at all, but to use other tools to examine the behaviour from inside a group or network. Using the theory proposed in Nudge by Richard Thaler and Cass Sunstein, namely that people do not always act in their own interest but they may in fact act in the opposite way due to systemic forces or peer pressure, she stressed the need to examine these systems to understand and ultimately change corrupt behaviour.

Continuing the theme of analysing corruption with relation to organized crime and clientelistic networks, Dr. Francesco Calderoni (associate professor at Università Cattolica del Sacro Cuore of Milan and researcher at a transnational crime research centre, Transcrime) led participants through the process of using computer software to analyse data for Social Network Analysis (SNA). The idea behind SNA is to show and analyse links between actors or groups of actors, and though Calderoni has used it to analyse organised crime networks specifically, he feels there is potential to apply it in anti-corruption research.

“There really is no single field where Social Network Analysis couldn’t be applied – it has been used in social sciences, originally amongst anthropologists for years to analyse relationships between people,” Calderoni said. “I think for anti-corruption research in general, Social Network Analysis might be useful for example, in showing the links between companies bidding in a public procurement process which may not be identifiable with other approaches.”

Such an approach might, for example, prove that what appears to be several companies bidding for a project, might actually be covertly related to each other. The process appears to be competitive, but the same group of individuals might be behind all of the various companies involved in the bidding process.

Following the workshop, researchers from work package 8 met to discuss the applicability of the new indicators on their own work, which will involve research on public procurement in the infrastructure sector in a number of EU member states.