One of the key aims of the ANTICORRP project is to not only produce high-quality and cutting edge research on anti-corruption, but also reach out to those who are in touch with those policies in their daily work: anti-corruption policymakers and practitioners. Last week, the V-Dem Institute and the ANTICORRP team at the University of Gothenburg organised a policy dialogue conference geared towards this aim. It brought together researchers with practitioners from national institutions, international organisations and NGOs.

The importance of this exchange together was stressed by Berger Simonson, Dean of the Faculty of Social Sciences at the University of Gotheburg. He welcomed participants by highlighting that researchers should aim to create data that policymakers can use to make the world a better place and support sustainable development. In doing so he highlighted one of the main aims of the conference: to present the research and data generated by the ANTICORRP and V-Dem projects to those policymakers who can use it to improve their work on good governance and sustainable development across the world. 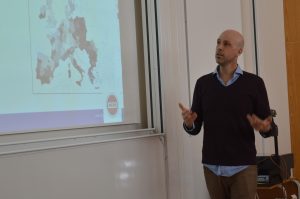 ANTICORRP researchers presented their work in two sessions. Especially researchers the Quality of Government Institute were able to directly present their work in the first of the two sessions. Nichalos Charron presented first results from the European Quality of Governance Survey. Together with other ANTICORRP researchers he constructed a European Quality of Governance Index. In it they show that perceptions of corruption vary strongly between the EU15 and the countries that joined the EU since the early 2000s. A different approach was taken in the research presented by Carl Dahlström, who made the case for meritocratic recruitment in the civil service. Countries relying on such mechanisms, as opposed to those relying on mainly politically appointed civil servants, showed lower public sector corruption. Dahlström thus highlighted the merits of separating political and bureaucratic careers when designing public institutions.

Two further presentations were more concerned with how to impose constraints on corruption and how to stop officials from becoming corrupt. Andreas Bågenholm showed the surprising results of a study trying to answer the question as to whether voters are imposing constraints on corruption by actually voting out politicians that are involved in corruption scandals. Surprisingly in many countries across Europe this does not appear to be the case. In contrast, however, Bågenholm showed that anti-corruption is an increasingly popular and successful topic in election campaigns, benefitting those parties that run on an anti-corruption platform. Marcia Grimes and Monica Bauhr highlighted the importance of civil society actors in fighting corruption. They argued that while very important in constraining corruption, civil society by itself can only be successful in a certain societal context that includes freedom of press or a certain degree of judicial independence. Monica Bauhr particular highlighted the difference in types of corruption in this context. Citizens that face corrupt practices in situations of need, for example when accessing education or health care, are more likely to be mobilised against corruption than those who, for instance, observe greedy politicians tapping into state funds. 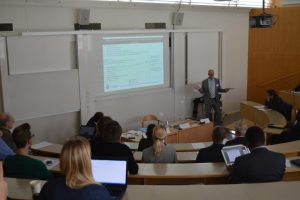 In a final presentation, Lena Wängnerud highlighted the relationship between gender and corruption. Presenting the results of several studies she argued that countries and regions with higher representation of women in their legislature tend to be less corrupt. At the same time, corrupt networks often prevent women from rising to power, as they are often dominated by men. This research sparked particular interest from the development practitioners in the room. In a short Q&A sessions they made clear that the issues presented by ANTICORRP researcher were highly relevant for their work.

The second session turned the tables – now anti-corruption practitioners gave presentations about their day to day work and their varying experiences. Two presentations presented Swedish experiences: Thomas Palmberg from the Swedish National Anti-Corruption Police Unit (NACPU) and Alf Johanson, Chief Public Prosecutor at the National Anti-Corruption Unit, gave their perspective on how it is to keep corruption down in a country often ranked as one of the least corrupt in the world. Both explained how their institutions work. Alf Johanson also highlighted the challenges he still faces in Sweden, from scarce investigative resources to the particularities of investigating foreign bribery. The two Swedish representatives were joined by Akim Ishimwe from the Center for Peace, Development and Democratic Governance. Based in Rwanda his organisation also works in Uganda, Burundi, Kenya, Tanzania on supporting democratization, good governance and human rights. Ishimwe presented examples on how these countries can serve as examples for successful reforms and good governance – even though they all still have a long way to go.

The presentations were followed by ample time for discussions, questions and answers. Researchers were interested to hear how some of their research findings resonated in a non-academic context. Practitioners who were present were keen to hear more about the results of the ANTICORRP research work. Representatives of organisations such as the OECD and Transparency International brought their own perspective to the table and the discussion resulted in a fruitful exchange. While the researchers were able to answer many questions, some remained unanswered and provided food for thought and potential for future research.

In giving this space, the V-Dem and ANTICORRP Policy Dialogue Conference achieved exactly what is was set out to do: to create an opportunity for a true dialogue between policymakers and academics, an exchange that both sides were able to benefit from. 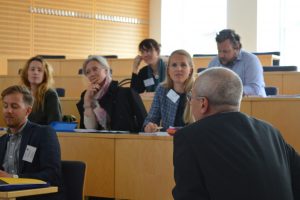